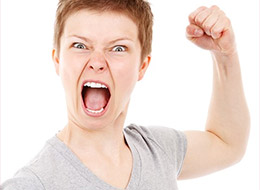 An overreaction to a justified wrong.

You and a few teammates are at a party when someone begins insulting you (for being athletes, for a team’s performance, etc.).

Despite everyone’s best effort to ignore these obnoxious comments, you can see one of your teammates is becoming more and more irritated. He has a history of losing his temper. What do you do?

Anger Scenario
You are at a party with some friends. A guy who is drunk comes over and makes a very racist comment to your friend who is African American. You find it very offensive as well but notice that your friend reacts immediately and starts to go for the guy. What do you do?

In the athletic world, it is sometimes more acceptable to express anger and not other emotions. Therefore, many people will act angry when they are really feeling something else that they are uncomfortable expressing, such as:

Anger is a normal emotion that becomes a problem when it:

Some common causes of anger are:

What bystanders should remind the individuals involved:

What bystanders should do for themselves: