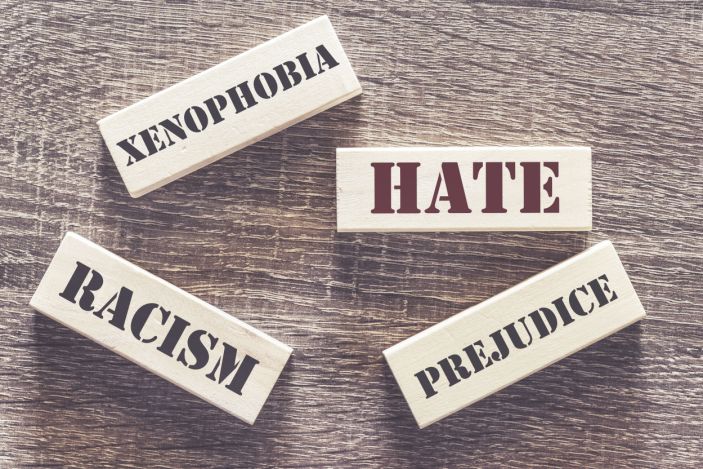 You are hanging out with teammates and one of them makes a very insulting and derogatory remark about someone’s alleged sexual orientation. They go on to sarcastically say that they definitely won’t be rooming with them on road trips.

You find it inappropriate. What do you do?

Discrimination Scenario
You go to a party off grounds with your roommate.  The living room is filled with people dancing.  As you make your way through the crowd, you notice a Middle-Eastern-looking couple nearby.  Your roommate mutters loudly enough for them to hear, “I didn’t know they let terrorists come to the party!” What do you do?

Discrimination Scenario
You and your cross country teammates are all pretty good friends. As you go on the long runs every day there’s always some good conversation. However, one of your teammates frequently says, “That’s so gay” every time he doesn’t like or disagrees with something. You know that one of your teammates in the group is not comfortable discussing his sexuality. What do you do?

Discrimination Scenario
You are in the dorm hanging out with some people from your floor. You are in a group conversation when one of them starts referring to women as hos and bitches. You know he really doesn’t mean it literally but others look uncomfortable with the language as they don’t know him as well. What do you do?

Stereotype: An oversimplified generalization about a person or a group of people without regard for individual differences.

Stereotypes can be positive (e.g., “Men are naturally gifted athletes”) or negative (“Student-athletes are not serious about school”). Stereotypes are often based on a “kernel of truth,” (e.g., observation of group tendencies). However, they are often applied inaccurately when making judgments about an individual or a set of individuals from that group.

Prejudice: An attitude, opinion or feeling without adequate prior knowledge, thought or reason.

Example: “They look like a bunch of nappy headed hoes” (Don Imus, talk show host fired after these comments).

Discrimination: Differential treatment based on unfair categorization. It is a denial of fairness prompted by prejudice.

Issues to Consider Before STEPPING UP

Research indicates that such strategies can start to reduce the biases that people hold and will make them more open minded about discussing the issues with you.

Individuation approaches: Try to get the person to see others as individuals rather than as members of a disliked group:

Recategorization or Common Identity approaches: Try to get others to see that the targeted group is similar to others and shares similar goals:

Confrontational approaches: You can directly address the bias by making the individuals aware of how their statement represents a bias or is inconsistent with their egalitarian values.
WARNING: Confrontation can make the biased person angry and may cause him or her to lash out or seek revenge. This approach should RARELY be used.

Note: It is inconsistent to suffer the consequences and want to fight prejudice from a race/class/ gender standpoint but then to practice it yourself against any others.

Adapted from Tolerance.org (n.d.). A web project of the Southern Poverty Law Center.