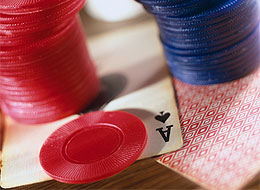 “There is no more vulnerable person in the world of sports than the college athlete.”
— Mike Welch, FBI Organized Crime Unit

A friend is selling some of his important and valuable belongings. He has also asked other friends to borrow money.

He is spending an inordinate amount of time at the computer and appears to be overly invested in the outcomes of sporting events. What do you do?

Gambling Scenario
You are in a class with your friend who is dating someone on the football team. Another guy in the class has started hanging out with you and recently began asking your friend to find out about the health status of people on the football team, specifically those with an illness or injury. She finds that rather odd and, quite frankly, so do you. What do you do?

Gambling Scenario
You and your teammate on the basketball team live in the dorms.  He has been playing lots of Nintendo in the lounge with someone else who lives in the dorms.  They are very competitive and pretty soon start betting. Your teammate has lost a significant amount of money only to bet more and more and continue to lose. The next time they play you hear his “opponent” say to him, “Speaking of your games this weekend, I know of an easy way for you to pay the money back and no one will ever know.”  What do you do?

Gambling Scenario
You’re sitting around the student union with some student-athletes from another team. One of them starts talking about how he signed up for the Fantasy Football League. It only cost $10 to join and the potential prizes are unbelievable. You know that anything requiring an entry fee is illegal but you don’t know him that well and after all, he’s not your teammate. What do you do?

In 2004 the NCAA conducted a gambling behavior survey among 21,000 student-athletes attending more than 1,000 colleges and universities nationwide, representing more than 2,000 teams.

Stevin Smith was an All Pac-10 Conference point guard from 1991-1994, twice leading his team to the NCAA tournament. However, he is best known for being a central figure in one of the worst point shaving scandals to hit college basketball in the last 50 years. During his senior season, Smith and a teammate took part in a conspiracy with fellow student and bookmaker Benny Silman to fix four games during the 1993-94 season, originally saying it was because of a gambling debt. Following the end of his prison term he publicly confessed they both had agreed to fix the games and had lied to escape a longer prison term. Silman received an extended 4-year sentence because of this (compared to Smith’s 10 months).

Gambling includes betting on the following:

Why do students gamble?

Students say they gamble because:

Note: It is sometimes very difficult to notice when someone has a gambling problem — there aren’t necessarily physical signs like in other examples.